A review of the Secret Listens Project written by the young people from the Edgware District Reform Synagogue who took part in the workshop at the Jewish Museum.

On the 20th January 2013, 3 pupils braved the snow on a trip to the Jewish Museum in Camden.

Leon Hirsh, Millie Bard and Jonathan Lubin from the EDRS religion school and were accompanied by Nigel Williams, Ben Braverman and Hannah Mendoza-Wolfson. When we arrived we were greeted by two ladies from a West End production company called Del and Ariel; who we worked with throughout the morning learning about the Secret Listeners and what happened at Trent Park in London.

The Secret Listeners were a group of German-speaking translators who put the Germans in a place of luxury in the form of Trent Park in North London to give them a false sense of security so the translators could listen in to the conversations to gain intelligence that would help the Allied forces in Europe. They worked in a separate outhouse in Trent Park in room called the M- Room were they operated.

Once we were comfortable with the topic, we then from scratch started to form ideas on a small production to present in the afternoon. We were all intrigued by the ways that the British manipulated the German Generals into releasing information on the on-going conflict in Europe and the Concentration Camps. We rehearsed our small show in the hall just before lunch with an audience just about reaching five. When we arrived back after lunch we were shocked to see that in the twenty minutes gone, so many people had arrived and there was an audience of over 60 now sitting waiting for the show to start. We had not realised that it wasn’t just us presenting but actually a small convention about the Secret Listeners.

After our performance, there was a short Q&A with just us 3 kids. We were also shown a short film made by a man called Mark Norfolk featuring Fritz Lustig, one of the only remaining Secret Listeners. After the film there was another panel discussion with Mark Norfolk (editor), Thomas Kampe (director), Julia Pascal (producer), Mike Tsang (photographer), Nick Ryan (audio), and Jonathon Meth (playwright) along with Fritz Lustig. Jonny and Millie participated in the panel discussion, both asking Fritz their questions. We arrived back at Edgware Station, excited to tell our parents about our amazing experience.

We would like to thank Nigel, Ben and Hannah for taking us, even on that very snowy day.

Welcome to The Secret Listeners Project 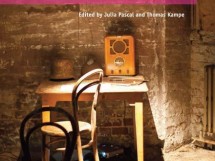 The book of The Secret Listeners is now available

A CALL FULL OF INTRIGUE!

This morning I was contacting future interviewees. One 85 year old gentleman spoke to me of Rudolf Hess being imprisoned in Trent Park. I have…read more →