Site-specific installation reveals secrets of when the British bugged Nazis in a Middlesex mansion Sunday July 22 2012.

German and Austrian refugees – many of them Jewish – who had fled Nazi Germany before the Second World War, were recruited by British intelligence to spy on top-ranking Nazi prisoners in a secret project based at an Enfield mansion.

This secret work was explored in an event  at Trent Park – the place where it happened. The project was made possible by a grant  from the Heritage Lottery Fund (HLF).

The project, called The Secret Listeners, showed how the refugees provided vital information because of their extensive knowledge not only of the German language but also cultural traditions. They recorded and made detailed transcripts of private conversations between Nazi senior officers, which yielded valuable strategic information to the Allies, including to what extent the German army was aware of and implicated in the Holocaust.

Nazi prisoners, including many generals and other high-ranking officers, lived a relatively comfortable existence in the mansion, previously the home of the Sassoon family, and where Charlie Chaplin and Lawrence of Arabia had once been house guests.  The British plan was to make the POW’s feel relaxed enough to discuss issues among themselves, unaware that every room throughout the building was bugged.

Young people working on the project were recruited from students and graduates at the University as well as volunteers from the North London Jewish Community. They were given access to transcripts of the original recordings held in the National Archives.

A subsequent performance of the resulting drama was held at The Jewish Museum 2.30pm – 4.30pm on 20th January 2013  and a permanent record of the project will be available at the University and the Jewish Military Museum.

For the Heritage Lottery Fund, Head of HLF London Sue Bowers said: “This is a fascinating but little-known slice of national history which underlines the vital contribution made by this group of refugees. The young people taking part will help ensure that the story is much more widely known while at the same time gaining a range of valuable skills.”

Our installation aimed to give insight and stimulate curiosity about this hidden British war history.
Pascal Theatre Company working with The Jewish Military Museum, The Wiener Library and The Jewish Museum to develop future links and share the educational programme over 2012 and 2013

Any feedback from the Trent Park experience and/or interest in the next phase please  email  thesecretlisteners@gmail.com 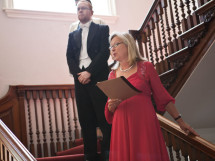 Photographs from the live event at Trent Park in 2012