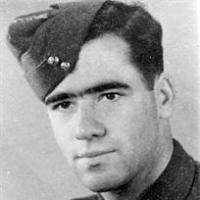 Audio interview with Fritz Lustig who was a Secret Listener during World War Two in the UK. His detailed biography is revealed in the interview.

Fritz Lustig was born in 1919. He was one of four children who were all brought up to be humanists and were baptised Protestants. However, under the Nuremberg Laws, Fritz was still considered a Jew because his four grandparents were Jewish. As a child in school, in 1933 Fritz had to stand up and give the Hitler salute, had to answer Heil Hitler,and listen to  his headmaster’s Nazi speeches.

On the 8th November 1938, during Kristallnacht, Fritz was out playing the cello with a friend when they heard on the radio that the German Councilor Vom Rath had died. They knew, then, that no Jew was safe. Fritz left Germany through the help of the Quakers. Both his parents succeeded in emigrating to Portugal, where the younger of his two sisters, was then living. His other two siblings also got out. Fortunately no close family died in the Holocaust.

As a ‘friendly alien’ he was briefly interned. He volunteered to join the British Army and, as a soldier, became a secret listener. His first posting was at Latimer House and Wilton Park. He worked as a listener from May 1943 until after the end of the war when he was sent to Germany. There his work meant listening to political prisoners. Eventually Fritz and his wife Susan, told their children and grandchildren about their experiences within the Intelligence Service. Fritz is in the process of writing his memoirs.